Huawei’s Ongoing Battle with the West

Huawei, one of the biggest smartphone manufacturers in the world, continues to suffer the fallout from last week’s US government ban, with more companies every day severing their ties with the Chinese multinational.

Yesterday, computer chip-designer ARM, based in Cambridge, was reported by the BBC that they had told their staff to cease all business with Huawei, in order to comply with President Trump’s decision.

The decision, taken on May 15, involved the President declaring a “national economic emergency,” banning the technology and services of “foreign adversaries” that could pose significant risks to national security. Huawei was one of the companies on the ‘entity list’ of companies that this rule applies to, meaning no American organisation can deal with them without government approval.

The ban stems from suspicions over the last month that Huawei’s upcoming 5G mobile networks could be utilised by the Chinese state to listen into phone calls, gain access to sensitive information, and be used to take control of futuristic driverless cars that rely on 5G. These were all categorically denied by Huawei, however Australia, New Zealand and Japan have all already banned the company’s technology in their respective networks.

On top of this, America and China are currently waging in a tariff war. President Trump, as part of his perceived hostility to China, imposed tariffs on Chinese goods amounting to $200 billion dollars earlier this year. In response, China announced that they would be increasing their tariffs on US imports to $60 billion from June 1. This new revelation around Huawei has increased tensions between the two nations even further.

Although the US government granted a temporary 90-day extension to Huawei to maintain current handsets on Tuesday, the ban has sent shockwaves throughout the technology world, and could spell chaos for Huawei in the future.

Huawei are the second biggest smartphone supplier in the world, just behind Samsung with around 17% of the market share – despite no presence in the North American market.

Perhaps the biggest hit to Huawei customers as a result of Trump’s executive order came from Google. On Monday, the company announced that they were suspending all business with Huawei aside from their open source licenses.

In practical terms, this means that Huawei phone users will suffer from reduced usability of the Google ecosystem that comes from the Android operating system that they use. The Google Mobile Services (GMS) collection of apps, including the Play Store and Maps, will not be accessible as they require a licensed and signed copy of Android which Google will no longer grant to Huawei. The even more pressing concern is that Google currently gives phone makers an advance code of Android a month before public unveiling, in order for the companies to test it on their devices. As Huawei has now been excluded from this, they will only receive the information on the same day they are made open source, potentially leading to vulnerabilities and security problems with the devices. Both of these combined could have catastrophic impacts on Huawei’s market penetration across the world.

Andrew Martonik from Android Central wrote in an article that “it simply isn’t reasonable in 2019 for any company to launch a phone outside of China without Google services,” due to people’s reliance on the Google environment. This could mean that Huawei may be forced to only sell in China, significantly harming their reach to millions of worldwide users.

Huawei’s UK executive vice president Jeremy Thompson stated in an interview with the BBC that they have in fact been preparing for this outcome. He admitted that Google’s decision would not be good for the company in the short-term, but will be managed in the long term.

“We have a parallel programme in place to develop an alternative…which we think will delight our customers.”

Phone shops such as Mercury Communications in Norwich could lose valuable sales on Huawei handsets as a result of the companies broken business partnerships. © Alex Dalton

In terms of hardware, the Trump decision has a potentially global impact on the production of Huawei’s handsets. The manufacturing process of their smartphones, such as the top of the line P30 Pro, relies on 33 suppliers from the United States alone, with the ban meaning the companies cannot work with Huawei. This affects the production of their smartphones for the world, not just in the US, so is a significant hurdle for them to tackle.

In the P30 Pro, both the front end modules, which deal with radio frequencies and mobile networks are made by Skyworks, based in Massachusetts, and Qorvo, based in North Carolina. The storage in the phone is deigned by Micron Technologies in Idaho, with their dealings with Huawei amounting to 13% of their annual revenue.

This has produced concerns that the President’s decision is not only impactful on Huawei and China, but also on the US companies that are reliant on exporting their expertise. One significant example of this is NeoPhotonics, based in San Jose and specialising in networking equipment, which has a contract currently with Huawei that amounts for almost half of their yearly revenue. 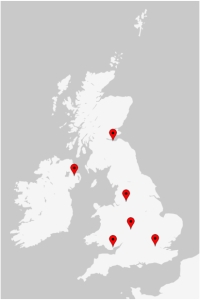 The six cities that are receiving EE’s 5G at the end of the month – without Huawei support. © Google Maps

In the UK, EE announced yesterday that their 5G network would be up and running on May 30th in the following cities:

Crucially, they stated that they would not be providing support for any 5G-compatible Huawei smartphone, and are in the process of removing Huawei technology from their mobile data network.

Marc Allera, chief executive of BT’s consumer division, which owns EE, told the BBC that the Huawei ban could cause huge problems for all of the UK’s mobile operators, not just EE. As Huawei technology is a big part of the networks, the ban “would require operators to replace such equipment before they could deploy 5G technology,” significantly slowing down the movement into super-fast mobile internet.

Listen to more about this story, with focus on privacy and cybersecurity concerns, here: