Living with Dementia can be funny as well as difficult according to Dr Jennifer Bute who has the disease and spoke openly about it to the Norfolk Conference for Care.

Dr Bute refuses to be labelled as a “sufferer” of dementia and says carers need to help people with the illness express their own personality, right to the end.

According to Alzheimers Research UK, every three minutes somebody developed dementia. Dementia is the single biggest cause for women in UK and the second biggest for men.  As charts shows below, Alzheimer is the most common type of dementia. The projected number of individuals with dementia in UK is not positive.

During this Dementia Action Week, previously known as Dementia Awareness Week, Dr Jennifer Bute’s speech provided deep insight for those who like her living with her condition.

Dr Jennifer Bute speaks at conferences and is now an active campaigner to help people with dementia.

Diagnosed with dementia when she was 63, she had to resign several years earlier. Dr Jennifer Bute now lives in a dementia friendly village in North Somerset and her husband died unexpectedly four months after they moved there. Drawing from her recently published book Dementia from the Inside: A Doctor’s Personal Journey of Hope, she shared her personal experience with dementia in a professional way. 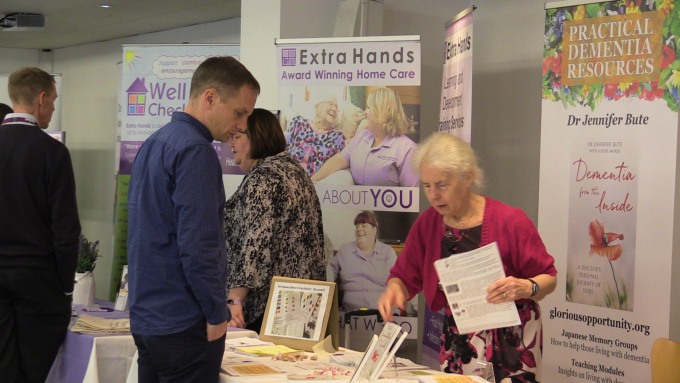 She said during a speech “a quarter of shame of how little I know about dementia when I was a GP.” When asked how different her life become since she was dignosed with dementia, she said:” I changed a great deal. When I was a doctor, I didn’t know that I didn’t know.”

Dementia does affect her life tremendously. She has difficulty coping with phone, because she cannot understand what people are saying on the phone. Even her families have to prearrange before making a phone call. Fortunately, she was a computer literate in the past. And now computer is her “backup brain.” She can deal with emails and Facebook, as well.

Confused with coins and money, she switched to online shopping. What’s worse, she gets constant hallucinations. She can smell something burning or feel bees flying around.

She does not fear the future. Instead of feeling herself a victim, for her, dementia is a real privilege and opportunity. “I can now understand it from the inside as well as the outside professionally,” said Dr Jennifer Bute.

Her story was turned into a BBC Radio 4 documentary, which was described as “no-nonsense and life affirming” in a Guardian review.

Sylvia Barrett-Jones, a stakeholder of Independence Matters, applied what Dr Jennifer Bute said to her mother who had dementia. She said in today’s conference,” I am very excited to know that I have been doing some of the right things to actually ensure that my mum is positive.”