Are degrees the best way to start a career?

With summer approaching and dissertations being handed in, it is now time for another group of students from universities across the UK to start their careers. However, it appears that several students are going into jobs they are overqualified for. With a report by the Organisation for Economic Co-operation and Development (OECD) saying that in England, almost one in three graduates (28%) have jobs that do not require a degree. That is double the average for OECD countries, at 14%, it is also only 4% higher than Northern Ireland. 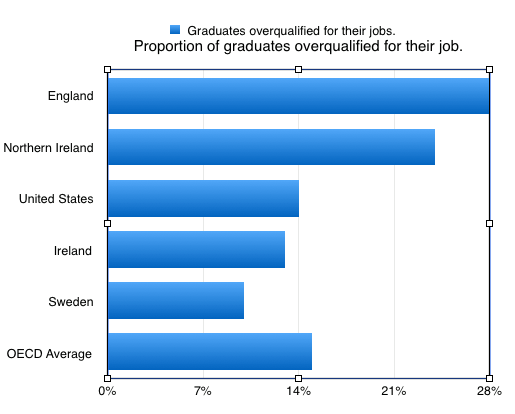 (a sample of OECD data)

But why are so many students ending up in careers that do not meet their qualifications, and what is to blame for the rise in overqualification?

In 2015 the Conservative Party announced plans to take the student cap away from universities, meaning there is no limit on the number of students they can enrol. While this has made degrees more accessible, there are concerns about the quality of the courses and the degrees students are achieving. Degrees now saturate the job market, making it much more competitive for graduate positions.

Some students believe they are overqualified because their degrees are in a completely different subject. Callum Read  graduated from BIM University in Brighton, a specialist music school. He graduated with a 2:1 but has moved home and found himself working two jobs. He believes that he was encouraged to study a subject of passion but didn’t get the support he needed to transfer it into a career. “Overqualified in that I’m qualified in a completely different field. We are encouraged to study things we are interested in within fields that we hope to work in. But it is very unlikely we ever be able to pursue careers in those fields and we end up having to conform to the very limited jobs that are actually available to us”. 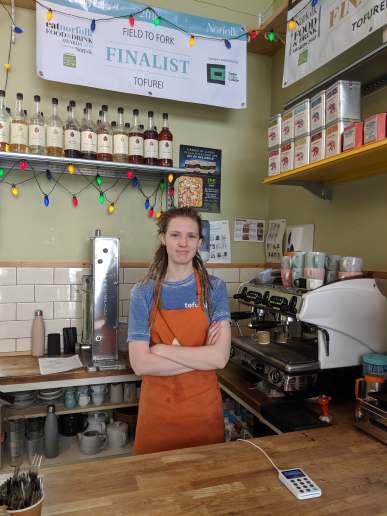 But does a degree even make a difference when employing somebody? Ruby Bardwell, a drama graduate, is the manager at Tofurei, a vegan café in the Norwich Lanes. She said that when she looks at employing someone that a degree only has an effect in a certain situation: “It wouldn’t be the deciding factor if there were other things involved. If the two CVs were the same, one had a degree, one didn’t then it might make some difference, because its an extra thing. But if the other person sounded better than that might be more important than having a degree”.

Sebastian Owen is the employability officer for the Norwich University of Art. The University boost of a 95% employment rate for all graduates after they finish. However, he believes it doesn’t paint the full picture as graduates are working in roles different from their degrees to help support themselves while they start their career: “During a period of one or two years when starting their careers. Working in what you might consider underemployed roles such as hospitality role as a way of supporting their emerging carer or practise”.

At the University Technical College Norfolk, they have already begun to change the way they prepare students for the next step in their education. The school, opened in 2014, enrols Year 10 to Year 13s. The college is STEM-focused, meaning it specialises in science, technology, engineering, and maths. The college has introduced dual tracking, where students can apply for both degree courses and apprenticeships in their final year. The school boasts a 50% apprenticeship rate, which is changing the stereotype of what children do after school. There is a real focus on employment. They have longer school days and have local companies come in to work with the pupils in projects.

There is not one clear reason to why graduates are working jobs that they are overqualified for. It could be the students are working in jobs to support them before they start a career, working to stay in cities with more opportunities, or working to simply survive. It seems to be a much bigger problem that has no quick fix in order to get graduates working in jobs they are qualified for.

Listen below as we ask, is a degree still the best way to start a career.